The IGS Senior Boys Basketball team recently competed in the AICES Basketball Cup at Hills District Basketball Stadium and are to be congratulated.

IGS Head of Year 12 Lyndon Kleeman said it was a fantastic day with students showcasing their talents.

“The games were fast-paced with emotions flying high,” he said. “IGS bounced back against St Euphemia College (26 to 13) and The Hills Grammar School (34 to 19) with Marquis Tropman and Isaiah Behi putting up big scoring numbers.

“Jaimie Lee was a defensive powerhouse inside the key, along with Jamison Power and Casey Madon, bringing enthusiasm and a natural flair of confidence. Luca Gandillet and Andrew Gillard were both calm and reliable in their roles.

“IGS then faced Pittwater House in a close encounter until the last two minutes (28 to 20) Oscar Brown, Oskar Rasmussen and Ryan Wilkins were valuable assets and proved themselves against older opponents.”

IGS qualified for the Division Four Championship where they met Northholm Grammar.

Lyndon said the first 10 minutes of the game was neck and neck.

“Once IGS calmed down and started moving the ball around they started scoring at will and took a commanding lead, winning the final 32 to 13. A tremendous effort from all students involved and bringing home a trophy had a smile on everyone’s faces!” 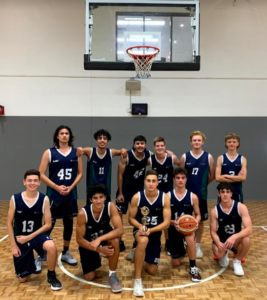