A wet morning couldn't dampen spirits on Wear it Purple Day at IGS, a beautiful display of Unity Through Diversity.

“At IGS we pride ourselves on the fact that people can be who they are and they can do that confidently, without fear or favour,” said Deputy Head of High School Paul Galea.

Students embraced the colour purple, enjoyed drawing rainbows and positive messages in chalk and were out in force at the gate collecting gold coins to be donated to the Wear It Purple organisation on Friday 30 August. In total, the School raised more than $500. 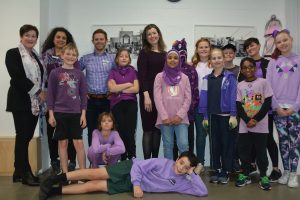 IGS was joined by Sydney City Police Area Command, who welcomed students as they entered the School gates.

Senior Constable John Baldacchino said they were proud to support the School’s celebration of Wear It Purple Day.

“The Police believe it’s a really important cause and we feel very strongly about anti-bullying and to be proud of who you are,” he said.

Senior Constable Michael O’Rafferty said the emphasis was on “making sure our youth are supported”.

“It’s really great that IGS is supporting the LGBTQI+ community because I really think it’s a community that needs all the support it can get,” Perri Fearnley of Year 10 said. “Especially in parts of America, this community are really fighting for their rights, and we are setting a great example for other countries.”

And Charlie, in Year 7, said Wear It Purple Day is her favourite day at IGS, not only because she loves the opportunity to wear the colour, but she loves being able to help people understand why this is so important.

“I love seeing the rainbow families coming together in creating such a great day,” Charlie said.

Staff were also proud to “stand up” and “stand out”.

Primary School Teacher David said he felt so lucky to be apart of a School so diverse and one that celebrates our differences, while colleague Amanda said she felt proud to be part of the IGS commuity.

Teacher Stephen said it was really important to be at a place where you feel loved and can be who you want to be, and was also proud to be at IGS, where students, parents, and staff embrace diversity.