Congratulations to Director of Sport, PDHPE and Outdoor Education Brian Downton who will take up a Deputy Principal role in Canberra next term.

Brian will join Mount Stromlo High School as Deputy Principal from the start of Term 4.

“I’m almost travelling a circular journey,” said Brian, who attended a public high school in Canberra before travelling to the UK for three years after gaining his degree, and worked in public schools in London and Nottingham.

Brian, who joined IGS in 2006, said departing the School was “bitter sweet”. 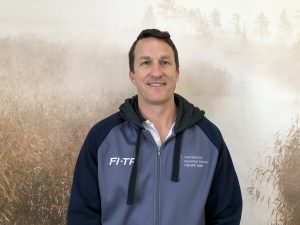 “I’ve loved working with the staff and kids and parent body, but this is a really good opportunity in Canberra,” he said.

“I was offered this role on the last day of last term, and I wanted to stay for my Year 12 students.”

“IGS has been vibrant and quirky, a really different school with a big community focus -co-educational and Preschool to Year 12. I’ve really valued that.

“The PE Department is unbelievable. I struggle to think of a more cohesive bunch of people. They work tirelessly for the kids and have a really good culture.”

Brian began at IGS as Head of Year 9, and enjoyed the opportunity to create the fourth House at the School, Bamal.

Brian enjoyed recruiting Bamalians and building a House culture. He helped forge the strong House spirit which saw the House win the House shield several times in its earliest years.

Brian continued to take on new responsibilities, including co-ordinating the Antipodeans expeditions to India and Nepal from 2007 to 2010.

“In some ways, it was confronting for the kids,” he said. “We took them outside their comfort zone. Seeing visible poverty makes students question the pursuit of material goods, and imparts a sense of social justice.

“They came back valuing community and family and with a stronger understanding of why social justice is important.”

In 2011, Brian enjoyed taking part in a teacher exchange to North Vancouver in Canada.

In 2012, he was promoted to Director of PDHPE, Sport and Outdoor Education at IGS, and in 2016 took on the challenge of helping organise the Year 10 SAGE journey to Tasmania which includes a “choose your own challenge” outdoor education component.

Among the highlights of working at IGS, Brian lists working with staff who have nurtured his capabilities as a teacher, and watching students grow and develop into “really good humans”.

He is proud of the students who have matured and returned to work at IGS in the Out of School Hours Care Program and as sports coaches.

He is grateful for the opportunity to have built the PDHPE department class curriculum with his colleagues – scope and sequencing from Year 5 to Year 10 – as well as the Sport and Outdoor Education Program.

He is rightly proud to have nurtured ever greater engagement of students in activities.

Since Brian started at IGS, training opportunities have grown from three a week to 35 or 45 a week.

This year, Brian and his team created the extraordinary IGS 1000-point challenge, sweeping the whole community into physical activity despite the COVID-19 lockdown.

He said he greatly enjoyed acting in the role of Deputy Head of High School while Paul Galea was on leave.

“This role is about relationships,” he said.

Brian departs IGS with our best wishes as he takes on this impressive new leadership role.