Paul Galea: Hello, Zoe Rawlinson. It’s Paul Galea, your old friend/enemy from IGS. I’m actually in Katherine, NT, and I believe you’re in beautiful Bilgola Beach in Sydney. So how are you, Zoe?

Zoe: I’m good. It is very nice to hear your voice again.

Paul Galea: Uh huh. When I say we were “frenemies”, we were mostly friends. Well, we did have our moments, but Zoe, first of all, what year did you leave IGS?

Paul Galea: Not that long ago.

Paul Galea: Yeah, I suppose it is. When you say that, it is seven years. Wow. So one of the reasons that I’ve contacted you to interview you is that you were a girl who probably, I wouldn’t say loved school, particularly in your early years. And yet I found out, quite by chance, that you are a high school art teacher at Pittwater House and that just made me so happy. I can also tell you that I told Ms Blacker and she was absolutely over the moon. I’ve never seen a bigger smile from her! So how did you go from that young girl, that little freckle faced girl to  being a serious and dedicated art teacher? 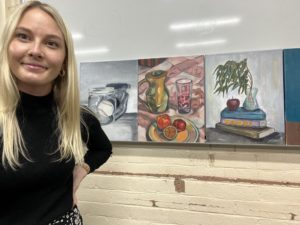 Zoe: Yeah, it’s a bit funny, isn’t it but I suppose you’re probably right. I didn’t love school. I enjoyed it, but I sort of felt a bit like I probably just floated by for the most part. Then back in Year 10, I thought art was pretty good and I kind of thought maybe I could branch off into becoming an art teacher. I haven’t really deviated from that dream. So yeah, I finished school in 2015, and I went straight to the National Art School. I did my degree there and then, I meant to take a year off, but ended up studying online a little bit more and then went and did my Masters at UNSW. And here I am!

Paul Galea: Wow. With any sort of influences? What made you want to be an art teacher? Someone in the family or there’s someone who inspired you? Perhaps?

Zoe: Well, there’s no teachers, really, in my family. I just sort of enjoyed art. And I remember thinking how much of an exciting place it was every week being able to go into the art room. I had some very fantastic teachers that helped, namely Ms Blacker and Mr Dennehy. And I suppose, with their guidance and support, I decided that I might actually be all right at it and, yeah, I just went for it.

Paul Galea: That’s fantastic. That’s really good and when you become a teacher, do you look back and think, “Wow, I can see myself in a lot of these kids that I’m teaching?” What I’m trying to find out is, do you get some sense of satisfaction from helping the students?

Zoe: Yeah, absolutely. I think I always really liked working with people, and I care a lot about just being around and helping where I can. Becoming a teacher has just sort of encouraged that a lot. I look at some kids who are drifting by and some kids who are super passionate and I treat them exactly the same.

I just want to try and encourage them to make sure that they find some sort of enjoyment being in my class and definitely being a teacher makes you reflect a lot on your time as a student. In my time, particularly in Year 11, I was pretty lost, I suppose at school, and Mr Dennehy kind of gave me a bit of an ultimatum. I’ll help you, but you’ve got to meet me half way. And if you don’t, then I’m not going to waste my time. I had Ms Blacker as my tutor from Years 7 to 12, and she was actually my mentor, and she changed my outlook on school a lot. I definitely have used both of what they’ve taught me, both as a student, and now, as a teacher as well.

Paul Galea: Okay, nice. That’s a very nice thing to say. Yeah, she’s a very good woman, and he’s okay too! Jodie Blacker is a champion.  I remember having long conversations with her about you, and how we could prod you into making the most of your ability? What we saw was outstanding ability but you just seemed to lack a little bit of confidence in going after what you wanted. We used to always have sneaky conversations about how I could get you to do stuff that you didn’t want to do. There was always a three pronged attack and you probably didn’t even know that. Basically, you had no hope of escaping us.

Zoe: Ms Blacker was awesome. You used to refer to me as your “fourth floor fool”, my locker was on the fourth floor, and I was always late. And Ms Barker was determined to make sure that I would get there on time and she just sat me down. And asked, is there anything I can do? What can I do to get you here on time? The only thing that worked was where she started giving me chocolate bars if I made it on time.  I think it was a pretty good win for me.

Paul Galea: Yeah, because you were coming from Bilgola on some days. Is that right?

Zoe: A little bit. For about six months, I was coming from Bilgola. But for the most part, I was just coming from Balmain, which is even worse because it’s really only half an hour to get to school. 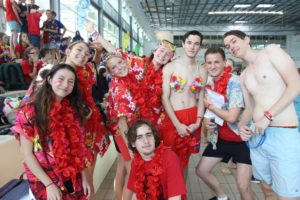 Paul Galea: If you were still around, I’d be giving you a detention for that! But you know, you’re probably too old for that, now! How are your brother Max and your little sister, who both went to IGS? Your little sister? I just can’t remember the name. What was her name again?

Zoe: Yes, they are all good. Max, is working with the family fruit distribution company in Shepparton in Victoria and Anna is personal training in Balmain.

Paul Galea: Anna! That doesn’t surprise me because she was always a bit of a fitness freak. I remember that. Fitness freak sounds like that there’s something wrong with her! I don’t mean that. She was very much into fitness. Obviously, you’ve got some happy memories of school because you’ve been laughing a lot, even just doing this. Have you got any particular happy memories or things that really stood out about going to IGS?

Zoe: I think it’s just a pretty unique space. Just being there and being around so many different cultures, I found, has been actually largely quite unique. Especially now jumping around schools as a temporary teacher and now a permanent one. You’re around so many different cultures, and I found that really exciting. I loved the sports carnivals and I loved ArtsFest. I would do anything to get out of the school camps but when I did go, they were pretty fun!

Paul Galea: Yeah, it’s really interesting. Very few people say to me, I remember Maths or English class. I love that you guys think it’s the carnivals or the camps or ArtsFest that made you think school was very interesting. Okay, have you got any advice because I send these out to the Year 11 and 12 kids at school, these interviews and it comes as a podcast. So have you got any advice or any ideas about some of the things that you’ve learned along the way that maybe would help them.

Zoe: I think it’s even more interesting now, having been through Year 11 and 12 and now teaching Year 11 and 12. There’s a few things, I suppose. One I think, would be what I learned. You’ve just got to make sure that you stay true to what it is you enjoy doing and follow those passions and subjects. Don’t try and sort of feel deterred by anyone. Stay on the part of the things that you enjoy doing. I think often now, on the other side of things, school are a very weird environment. And it pays to be nice to others and try to be kind to others. I think we sort of don’t realise how much of an effect that can have on someone’s day if you’re just a little bit kind and courteous to them. Year 11 and 12 were really fun. Try to enjoy it, use your teacher’s advice and resources and remember that they’re there to help you, not to hinder you. Yeah, I guess trying to try and have fun as well as enjoying it.

Paul Galea: Very, very good advice. I think the whole thing about being true to yourself in following your passions is another thing that has resonated in these talks I’ve had with people. It’s been wonderful catching up with you, Zoe. Wonderful hearing that you’re a one of us, one of the good guys. It’s been an interesting couple of years and you sound as though you have just hit the ball out of the park. And it’s been great catching up with you.

Zoe: Thanks so much. It’s lovely to hear from you.

The power of believing that you can improve